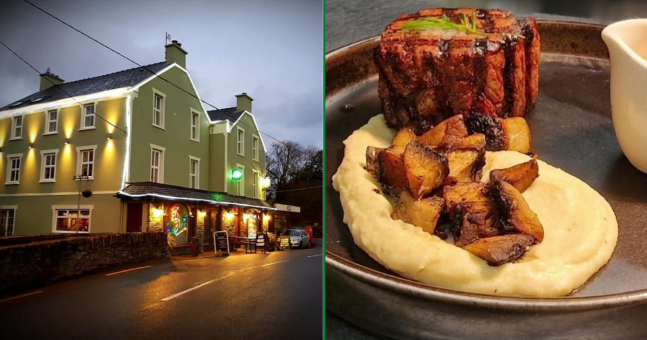 These are the 10 best hidden restaurants in Ireland

While it can be easy to find all of the well-known popular restaurants in Ireland with a quick Google search, what’s harder is finding the hidden gems. By their very definition, these places are lesser known but much loved by locals, and Tripadvisor has found the top 10 hidden restaurants in Ireland.

The Best of Hidden Gems was determined using an algorithm analyzing the quality and quantity of reviews and ratings posted on Tripadvisor during the 12-month period from July 1, 2021 to June 30, 2022 for tagged restaurants as a “hidden gem” on Tripadvisor. .

So the next time you go out for a meal, why not try one of these places instead? It will probably be easier to get them a table, and by being on this list you know the food will be delicious too.

Achieving first place in all of Ireland is The Cross Guns in Navan. This hidden gem represents vegan and vegetarian diets, serving reasonably priced lunch, brunch, dinner and snacks.

The Cross Guns opens from Thursday to Sunday.

The Grill House tops Swords’ 54 restaurants and is second on our list of the best hidden restaurants in Ireland. This Lebanese restaurant serves what Tripadvisor users call “the best lebanese/turkish restaurant ever“.

The Grill House is open every day except Tuesday.

As someone who loves steak, I can say that finding a good steak is incredibly difficult. Even in real steakhouses, I often find that the meat isn’t cooked the way I asked for, or it’s the wrong steak, and while I’m not a picky eater or someone who would complain about that, I would generally expect steakhouses to be successful. Which makes me very intrigued by the Mountain House Steak and Seafood Bar in Clonakilty, which comes third on the list of Ireland’s hidden gems.

They open from Thursday to Sunday.

The Thatch is Birr’s second highest rated restaurant on Tripadvisor, taking fourth place on the list of Ireland’s hidden gems. They specialize in local cuisine, pub food, both Irish and European, and they are open every day except Tuesdays.

A hidden gem indeed; I had never even heard of Charcoal Kitchen Cellar until today, but after a quick Instagram scroll, I think I’ll make it my mission to visit. This Blackrock restaurant specializes in steaks and seafood, using locally produced ingredients. And as the name suggests, they have an excellent cocktail menu, all of which cost €11 (a godsend in these days when you’d be hard pressed to find cocktails under €15).

Coal Kitchen Cellar Cocktails is open Wednesday through Sunday. You can book a table HERE.

The Boathouse Restaurant and Bar, Donegal

Of the 11 restaurants listed in Moville on Tripadvisor, The boathouse bar comes second. Closed on Tuesdays, this spot is helmed by Chef Darren Deery (no pun intended), who works with fresh, local ingredients to produce a unique, seasonal menu. Another reason why this may appear on the list of hidden gems of Ireland is also the magnificent views it has over the water.

The old stone house won Best Restaurant in Roscommon at the Irish Restaurant Awards and focuses primarily on organic food.

This hidden gem is only open on Fridays, Saturdays and Sundays.

the anvil is part bar, part B&B and part restaurant, and a hidden gem on Kerry’s Wild Atlantic Way. The restaurant focuses on Kerry produce including Kerry Beef, Slieve Mish Lamb and Dingle Seafood. It’s a casual place with good food and open every day.

The Castle Cafe, which is located at Blackrock Castle in Cork, opens Wednesday to Sunday from 10am for brunch, lunch and dinner. This is no ordinary cafe, however, earning its place at number 31 on a list of Cork’s best restaurants (464 of which are listed on Tripadvisor). They serve Mediterranean cuisine with an Irish twist and are of course based in a beautiful location.

And finally we have Girl and the Goose based in Dublin 4. Owner Michael Sabik, who has worked in acclaimed restaurants such as La Maison and Chapter One Restaurant, opened Girl and the Goose to bring the best of Irish cuisine and French to the guests of Dublin. in a warm and relaxed setting. The team prides itself on serving “simple” dishes that offer taste, freshness and presentation. Worthy of its place on the list of Ireland’s best hidden gems.

And There you go. Next time you’re looking for a place to eat, why not opt ​​for a hidden gem instead of one of the more well-known classic restaurants? Wow your companions with your choice.

KEEP READING: The best vegan wedding venues in Ireland have been revealed