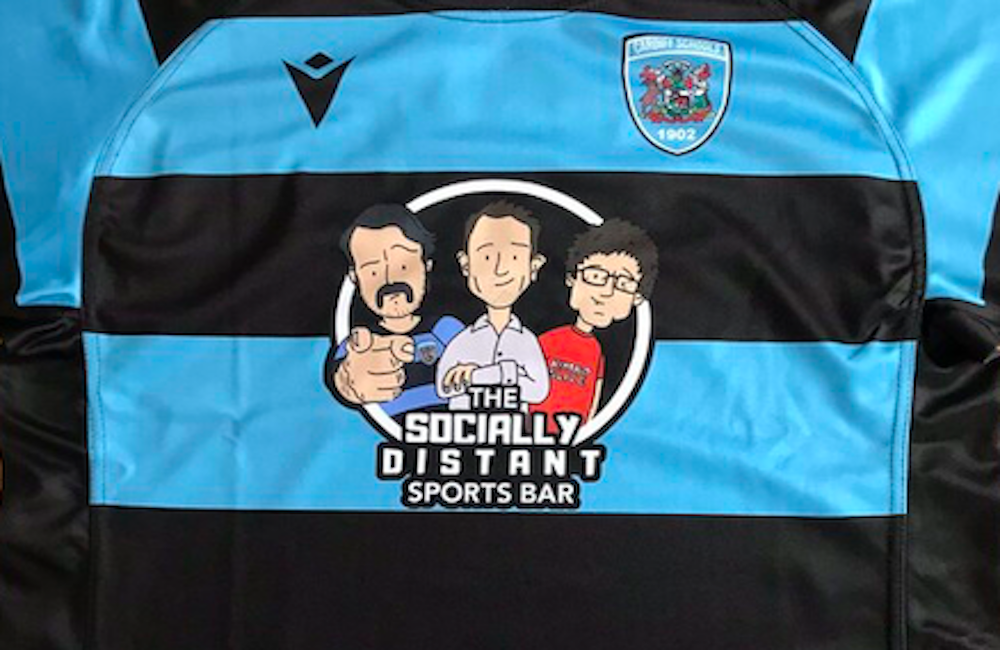 This week, The Socially Distant Sports Bar will celebrate its 100th episode. The lockdown podcast success story was brought to life by the comedic dynamism of Mike Bubbins, Elis James and Steffan Garrero.

A hugely successful patreon program has seen the podcast give back to the sporting community in Wales.

Here, Socially Distant Sports Bar host Steffan Garrero explains how, through a socially responsible approach, with a focus on the Welsh sports community, the podcast has taken on a life outside of itself.

“When we started The Socially Distant Sports Bar, we wanted to create a fun sports podcast. Something that dealt with sports like you do when you talk about sports with your friends.

“We knew it would work as a podcast, but the business side was new to us. We looked at marketing. We watched that a lot.

“And then we saw a tweet from Cardiff Schools Rugby asking for shirt sponsors and it all fell into place. We would put our product on the shirts of the local teams.

“A win, a win for us. Combine advertising and sport.

“Advertising costs money and does not always guarantee an increase in numbers.

“There are three of us on the podcast and we have all chosen a team to sponsor.

“I teach at Cardiff Metropolitan University so I chose the women’s football team there. They play in the Adran Premier and their matches are shown on S4C.

“So come the first game of the season, our brand is live on TV.”

“Ultimately, the success of any advertising comes down to numbers. The big numbers for us as a podcast are downloads. And they have increased each time we sponsor a team.

“Mike chose the Cardiff Schools U16 rugby team to sponsor and Elis selected two of the Academy teams from Carmarthen Town FC.

“The logos on the shirts stand out and it gets parents, coaches and fans talking. These conversations drive people to search for the product.

“Brand awareness leads to action. Our social media engagement with people directly associated with the teams we sponsor shows that it works.

3. Being true to who we are

“The podcast goes off on a lot of tangents – it’s unscripted and it leads to a lot of fun conversations.

“One thing we talk about a lot is the attitude of sports fans and the media towards women’s sport.

“Lazy stereotypes. How some men on social media find it impossible not to respond negatively to anything about women’s sports.

“We talked a lot about leveling the playing field. But talking about it is only one step.

“Being proactive and supporting a team is another step.

“We really believe in what we say, so sponsoring a team in the Adran Premier made perfect sense.”

“Playing sports is one of life’s greatest experiences. You make lifelong friends and push the boundaries of what you thought you could do.

“You learn about teamwork and individual responsibility. But as a father of three, I know the financial costs of any sport, at any level, are high.

“By sponsoring shirts, we can help players, parents and coaches worry about performance rather than money.

5. Our logos are really cool

“Dave Prendergast of Doodlemoose Designs creates our logos and for every team we sponsor, we wanted there to be something unique about that design.

“Something special, which hopefully shows that we are part of your team rather than just a distant benefactor.

“For Cardiff Met WFC I wear the kit in the logo, for Cardiff Schools U16 Mike wears the blue and black stripes and for Camarthen Town U10 and U14 Elis has the All Golds kit.

“But one important thing.”

Business owner ventures into food amid pandemic, says business is all about courage