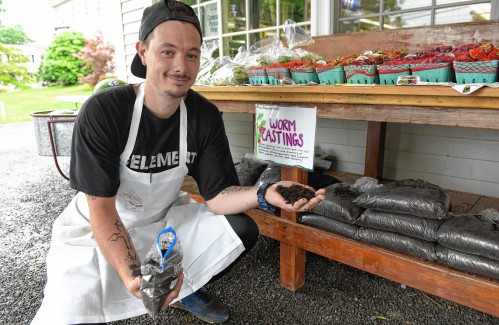 Millstone Farm Market in Sunderland, residents team up for a recyclable ‘food loop’

SUNDERLAND – A partnership between a local resident and a farm stand has formed a “food loop” where any produce not consumed is put back into the ground to fertilize the next harvest.

Sunderland’s Millstone Farm Market has established a relationship with local resident and composter Ben Goldberg, where whatever remains on the store’s shelves is turned into compost. This compost is then turned into worm droppings, a fertilizer filled with minerals and nutrients for the plants.

“It’s the cycle of life, vegetables come from the earth and end up in the earth,” said Cory Stafford, market manager. “We don’t like to throw anything away. “

The store’s composter is collected every week and transformed into fertilizer. Stafford said the store had only recently started the practice, but it has a tradition of recycling anything dating back at least three years.

“I scoured the entire store to see if everything had a second or even a third use,” Stafford said. “We are proud of our products and we want those who grow theirs at home to benefit as well. “

When the compost bin reaches Goldberg’s workshop, he crushes the contents into small pieces before placing them in his worm bin, which is a wooden box with four sections filled with soil and two species of worms. Once the compost is added, he adds a mixture of “worm-free” soil and closes the box to let the worms feast. As the worms digest the compost, they excrete the nutrient-rich droppings, which Goldberg wraps up and returns to the Millstone Farm Market.

“Nutrients are scavenged from food scraps as they break down and pass through the worm,” Goldberg explained. “The term for this is the nutritious food loop, much the same way it is with us. … Excess nutrients are excreted and returned to the environment.

Even the compost that Goldberg cannot use for the worms is used. He said some foods are more attractive to worms than others, and he feeds the leftovers to his two goats.

“My worms are pretty picky eaters,” Goldberg said. “They don’t really like onions.”

The process, which Goldberg says takes a few months, is straightforward. The bin has four sections with bars separating each bin. He works a few sections at a time and when he collects the droppings, the worms crawl to the next section where the new compost is dumped.

“When I stop feeding in that bin, they migrate to the salad bar,” Goldberg said, pointing to the section he had just filled with compost. “I harvest the guts after their migration. “

Goldberg, a carpenter interested in biology, said local production of agricultural products is only part of the agricultural economy.

“Everyone is talking about local growth. It’s one thing to grow locally, ”Goldberg said. “Local nutrition and fertilizers are also part of it. He supports this industry.

He said he was motivated to partner with local markets and undertake this process with the idea of ​​recycling and giving back to the environment.

“It’s not a business, it’s fun for me,” Goldberg said. “It’s the idea of ​​creating food loops. Millstone Market waste is someone else’s resource. This kind of thinking is quite important.

According to Stafford, Millstone Farm Market originally recycled “95%” of their produce, but that number is higher now with the soil creation process. Stafford said he is happy when the products are reused in any way if it helps the environment.

“As long as someone or something gets the beneficial factors out of it,” Stafford said. “It is important for all of us to do this.

The market shelves are full of pasta, salads and yoghurts made from store-bought produce. Stafford said the store also always creates pasta or salads with leftover produce that hasn’t spoiled yet to reduce the number of items thrown into the compost bin. He added that “the opportunities are endless” when it comes to recycling.

“We’re always thinking of recipes,” Stafford said. “We try to minimize the compost, but some things just can’t be used. … We don’t want to throw something in the compost if it’s still good.

The store has a lot of staff turnover as it hires students for summer jobs, which Stafford says is an opportunity to teach more people about the benefits of composting and recycling.

“I lead everyone in the store, constantly teaching it to new hires,” Stafford said. “I also hope that as a teacher – even if it is related to work – they will use it in real life.”

Stafford said the market practice of recycling whatever they use is something he hopes other businesses in the city will start doing. He wants the Millstone Farm Market to take the lead in this process and “lead by example” to others in the area.

“As a small business, we hope other businesses will hear about this and maybe consider joining us,” said Stafford. “In the bigger picture, it helps the planet.”