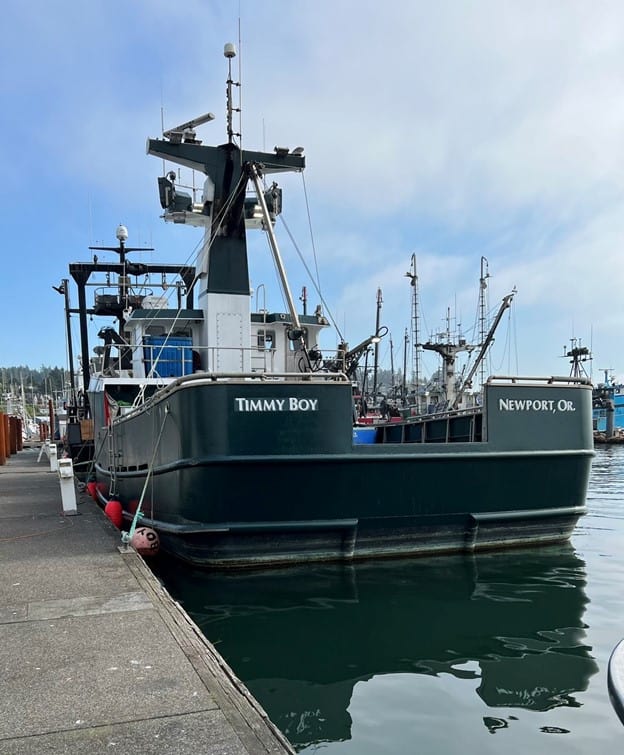 by the Ardent Gourmet

Unlike Fisherman’s Wharf in San Francisco, Newport Bayfront’s historic harbor is the real thing, home to a flotilla of brawny fishing boats, the kind you’d want on your side in a bar fight (if you were in a boat bar fishing). Take Timmy Boy. Can you think of a better name for a murderer?

Local seafood, a beautiful space, bright and airy, overlooks it. There you patiently explained to your wife that Panko, “the sloth’s breadcrumbs, made by an industrial process”, was not equal to cracker crumbs and so she shouldn’t get too high hopes for fish & chips. of halibut that I just ordered. His response to this well-informed statement was an alarming, bland smile. You know your wife’s bland smiles all too well.

The halibut arrived, plump, sizzling, enticing, arranged on the plate like a glamorous shot. 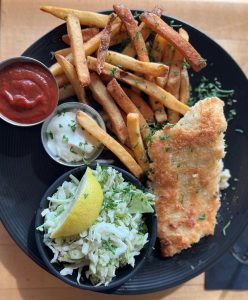 Another woman in the multiverse might have hooked you up with a fork for your alleged manslaughter, now a Class A felony in many jurisdictions. But, cutting you off a piece, as big as her extraordinary heart, she said, “This is the best fish and chips on the Oregon coast.” Fresh, flavorful, meaty, chewy, crunchy, succulent, chewable, you had to agree, although in your opinion it shares the honor with the cracker-crumb version at The schooner at Netarts. And like The schooner, there is room for their fries to improve. Not crispy but crunchy, they were a little dry and mealy. Were the potatoes aged? Where are they double fried? You think both are essential. Also, their Red Duck branded ketchup was bland, too sweet for your lights, detached from its chutney roots. (This restaurant has the chops to make its own ketchup. You wish they did.)

The fish & chips came with fennel salad. Fennel is one of the great vegetables in God’s garden, with a bewitching licorice flavor, and it is found in few markets or restaurants. Kudos to this resto for not going the standard coleslaw route, but for pushing new tastes. It’s a small detail but a big saying. 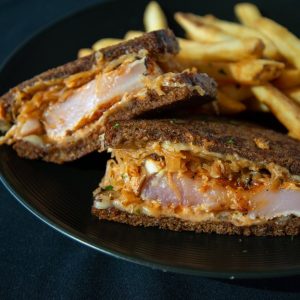 In the all-important Nobel Prize category of Reuben sandwiches, their Reuben sandwich, with homemade albacore tuna in place of beef, should surely be a contender. The tuna was an inspired substitution. Its spice blend, with a prominent coriander seed, echoed Katz’s Delicatessen’s in NYC (center of the pastrami universe). Bravo for having riffed this sandwich so extraordinarily well! Inasmuch as you grew up in Jewish delis in New York, you feel you have the right to respectfully suggest that it would be even better with a good Jewish caraway rye (not the supermarket-style rye they used) . Then again, there’s no aspect of life – from romance to gin rummy – that can’t be improved by a good Jewish caraway rye. You order yours online at an awful cost, but it’s worth it. 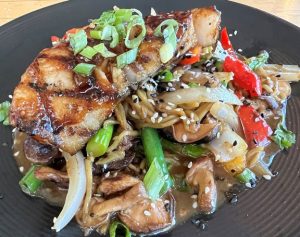 Grilled Hoisin Black Cod was a master class in fish cooking. It was glazed with hoisin, hatched with arctic char and moist inside. Perched atop a medley of vegetables with yakisoba noodles, it was cod brought to its peak. This is proof that there is a God in heaven. 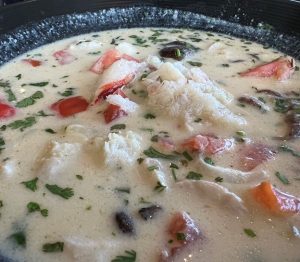 Moqueca de Peixe (Brazilian stew) is a lyrical coconut broth with crab, prawns, redfish and sharp lime vegetables. It may be Brazilian but it sure tasted Thai. In fact, while chatting with chef Enrique Sanchez-Rodriguez, he revealed that they add Thai green curry paste. You think the delicate flavors of the crab and redfish may have gotten a bit lost in the tangy broth. Stronger proteins such as salmon or lobster or monkfish might have been better in your opinion. (Although, of course, neither the lobster nor the monkfish are local.) Or just more of those fabulous chubby prawns. 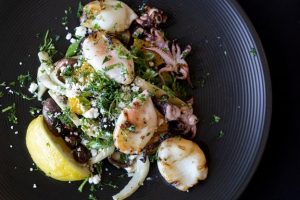 Their grilled calamari salad was a welcome change from the standard fried calamari (delicious as that may be). The sweet and delicate flavor of calamari turned out wonderfully with pieces of char. He also highlighted the fennel. Also, pieces of orange, a risky choice that worked. And kalamata olives, poblano pepper, queso fresco. A great harmony of flavors and textures. Are the calamari local? You’ve never seen it sold locally.

(You wonder if Local seafood would be willing to try stuffed squid. They could do it Vietnamese style with ground pork, glass noodles and fish sauce or Italian style with breadcrumbs and such. It’s absolutely delicious and would seem appropriate at this pool temple.)

A late summer special was the chinook salmon crostini. It was grilled salmon, roasted poblano romesco, mango-tomato pico-salsa, white balsamic vinaigrette, grilled focaccia, cilantro. Yes, it was complex, but so is a Rolex. It was as delicious as it sounds. You note that the fish here, and in all of their other dishes, was perfectly cooked, to the equivalent of medium rare, what the French call medium rare. It takes some serious cooking prowess. 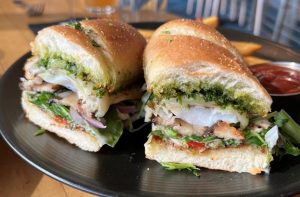 Their Rockfish Melt sandwich was tasty but not glorious. The pork belly, which was supposed to be crispy, had no textural contrast and little to no flavor contrast to the fish. In this context, it appeared more like an anonymous protein. Salty crispy bacon would have been better. The Italian salsa verde was a solid choice, but it needed more for the zing. The bread was quite good but not great. This sandwich called for a homemade crumb such as Wolfmoon Bakery in Nehalem could provide. It’s confusing, but there are few, if any, bakeries on the Oregon Coast that can operate at this level. 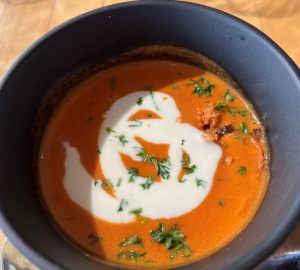 Their smoked salmon bisque was silky, bordering on overly salty. Which didn’t stop you and your wife from arguing to the last drop.

You wanted to like their smoked tuna belly stuffed egg, it was so pretty. You really liked the smoked tuna itself, but overall it was heavy. The mashed potatoes (a nice purple) used to stick the egg to the plate and the tuna in the egg may have been a factor.

Their Bloody Mary was loaded with goodies as is the style these days, bacon, scallops, asparagus, olives. The rim of the glass was elegantly flecked with salt and lemon zest. It wasn’t bad at all, standard actually, but not the wow you were hoping for. They could up their game. You recently visited a bar that put tomatoes in a centrifuge to extract the plasma. You were amazed by the flavor. Why not here? 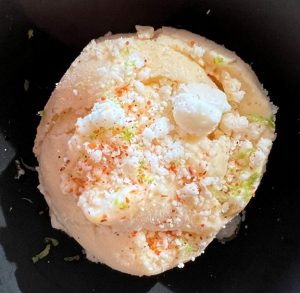 Elote corn is Mexican street corn, grilled and sprinkled with, among other things, cojita cheese. Local seafood makes an ice cream riffing that which slapped you with pleasure, one of the memorable ice creams in your life. Chef Sanchez described how they roasted the corn, mashed it, put it in a fine china cap, reduced it. Then add cream, condensed milk and eggs to make a custard. Then add the fresh corn kernels. Then anoint it with salty chunks of cojita cheese, lime zest and a dash of elote spices (salt and chili powder). It was an ice cream to haunt your dreams, an ice cream that only a great chef could have created. Well worth a visit to this restaurant just for that.

As good as their ice cream was, their bread pudding was not. A good bread pudding has a wonderful texture to the bread used, especially its crust which should have a satisfying chew. It should be creamy. This pudding had no chewy quality and although there had to be egg to hold it together, there was no luscious custard feel. He just looked soggy. You think it needs to be stripped down to the studs and rebuilt.

The prices are fair. The service is warm, courteous, fast. You would like the wine pours to be more generous. The selection of beers is ample. You love their rotating faucets.

Like most coastal restaurants in Oregon, this restaurant is remarkably versatile. You could come here with sullen teens, naughty tweens, friends, parents, or on your own. You can attest that he is wonderful for dates with a love-inducing quality.

There is a lovely market downstairs where you can buy the seafood they use as well as a number of sauces and such.

Granted, you have a few criticisms but these are really quibbles about this restaurant as a whole, almost unavoidable in such a successful operation. This is an exceptional, chef-led, imaginative and passionate restaurant that stands out as a beacon on the Oregon Coast. It’s pretty good that it’s well worth a trip inland. It’s good enough to come back to it over and over again (as you have and will). You are very impressed by the breadth of the menu, the virtuoso specialties, the range and impeccable quality of the ingredients, the technical mastery and consistency of the cooking, the artistry of the plating. 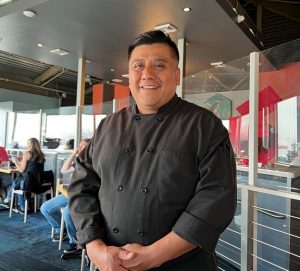 Chef Sanchez’s cuisine is lively, festive, assertive, colorful. It exalts the seafood harvested in our waters, favoring their delicate taste, without masking it, which is not easy. He started his career as a dishwasher and rose through the ranks thanks to his determination (and, obviously, his enormous talent). You are very impressed by his willingness to take risks, his imagination, his technique, his vast knowledge of different cuisines and how, like a geneticist, he skilfully draws from them – French, Italian, Mexican, Thai, Jewish charcuterie (from all things) – to be grafted into his creations.

Increasingly, the Oregon Coast is harnessing its culinary genius. Local seafood is a gem. Shine on your mad diamond!

You can see this and other Ardent Gourmet reviews at www.ardentgourmet.com