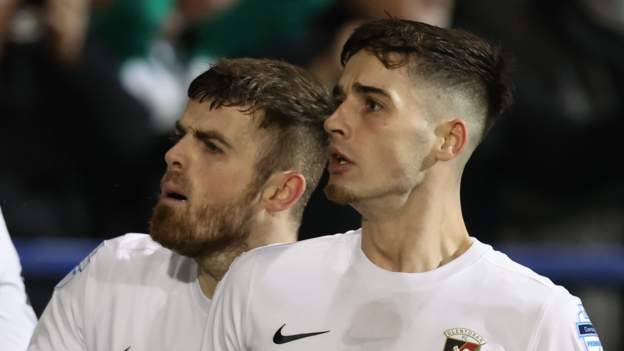 Rory Donnelly led the visitors in the lead after just four minutes when he guided Shay McCartan’s corner home.

Jay Donnelly wrapped up the win on 62 when he slapped after Conor McMenamin’s explosion on the left flank.

The Glens are tied on points with leaders Linfield ahead of Monday’s Big Two derby at Windsor Park.

The match at Showgrounds was the only game on Wednesday night after Crusaders v Glenavon was postponed for reasons related to Covid.

Mick McDermott’s side, who extended their unbeaten run to 13 games, got off to a perfect start as Rory Donnelly climbed the highest to meet McCartan’s corner, finding the back of the net despite Coleraine goalkeeper attempt Gareth Deane scrambling the ball.

The hosts – who did not have leading scorer Matthew Shevlin – didn’t let that blow deter them, however, and could have equalized through Rodney Brown, but the defender steered Conor McKendry’s corner over the bar.

It came after Coleraine youngster Patrick Kelly was turned down by Caolan Marron’s brilliantly timed tackle, while Jay Donnelly and McMenamin failed to keep their efforts on target for the Glens.

Coleraine boss Oran Kearney opted to turn things around early in the second half by replacing Aaron Traynor with James McLaughlin, and it almost paid off instantly as the forward directed Josh Carson’s cross over from the bar.

The home side failed to pass Aaron McCarey, however, and ended up two points when McMenamin scored Donnelly for the former Cliftonville forward’s 17th goal of the season.

Lyndon Kane and McLaughlin tested McCarey soon after, but Glentoran’s defense – who have now kept their clean sheets in six of the last seven games – must not have been breached.

Coleraine’s attacking troubles boiled down to 10 minutes remaining when Jamie Glackin released a wide volley after taking a good position inside the box.

Coleraine are now winless in five as Glentoran maintain their recent excellent form as they prepare for Monday’s crucial meeting with Linfield.

Shadow of Omicron on Christmas, New Years biz for restaurants