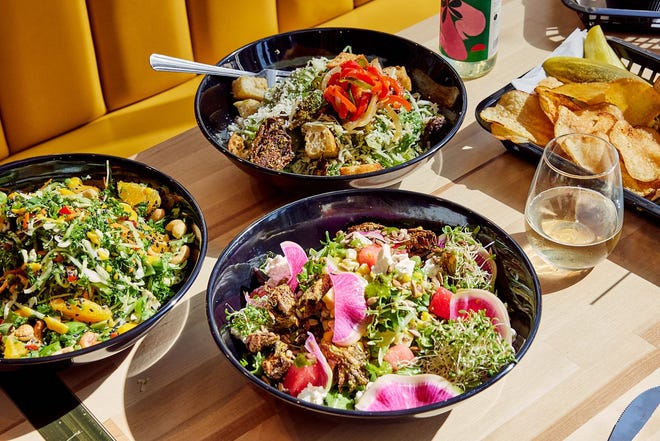 Local Foods, a Houston-based restaurant that sources meals made from scratch from ranches, farms and other local vendors across Texas, has opened in downtown Austin.

The new two-story restaurant at the corner of San Antonio and West Second streets has floor-to-ceiling windows, a large outdoor patio, and earthy interior tones. Natural light and vegetal decor are an extension of its vegetarian, farm-to-table cooking philosophy.

“We’re just so honored to be here at this place and sharing our love for amazing food, fostering a positive environment, creating a great place to come and work,” said Nikki Dillree, Deputy General Manager of Local Foods in Austin. She said she wanted the restaurant to be a place where Austinites call home and eat great food.

Founded in 2011 by chef Dylan Murray, restaurateur Benjy Levit and his partner Martin Berson, Local Foods had grown to four locations in Houston before entering the Austin market – first as a pop-up in 2021 before opening a downtown store last month. The brick-and-mortar location in the Second Street District had been under construction for over a year to renovate the space for the new restaurant.

Local Foods executive chef Zack Sutton said local vendors were part of the inspiration behind the restaurant’s offerings. Using Farm to Table Texas, a distributor of locally grown produce, the Austin site gets its bread from Slow Dough Bakery, dairy from Antonelli’s Cheese and homemade yogurt from Ruthie’s.

For Sutton, having worked in the restaurant industry for most of his life, working at Local Foods was a refreshing change. Sutton cited the longevity of employee retention at Local Foods as making a difference in his job.

“The people behind the business were my selling point,” he said. “This company is what stands out from other employers. When I was in Houston, I met employees who had worked for the company for 10 to 20 years. You don’t see that very often in restaurants.

Local Foods offers a varied menu: from crispy chicken sandwich with nut-seed breaded chicken breast, to Asian chicken salad topped with oranges and homemade fries, there’s something for everyone.

Since moving to Austin means using different local vendors, Sutton said they find recreating the menu to fit local Austin ingredients to be an exciting challenge.

“There’s a lot of creative freedom” with our menu, Sutton said. “The ingredients we buy here in Austin are different than in Houston, so it’s unique.”

Local Foods is best known for serving Houston-based vendors such as Katz’s Coffee. With its new location, Local Foods has expanded its partnerships with vendors in the Austin area and is looking to expand its roster.

“The team always welcomes introductions to other local farmers and vendors in order to continue to grow their partnership base,” according to a press release.

Chef and partner Dylan Murray has worked with Local Foods’ menu since it opened in 2011 and said he looks forward to building relationships with more local vendors in Austin.

“We believe sustainable sourcing practices mean better quality offerings and improved relationships with our community,” Murray said in a press release. “Bringing this longtime Houston favorite to Austin reinforces our purpose and commitment to supporting locals in an accessible neighborhood setting.”

The new restaurant held its grand opening on June 25. The restaurant is open daily from 11 a.m. to 8:30 p.m. For its menu and other offerings, visit its website.