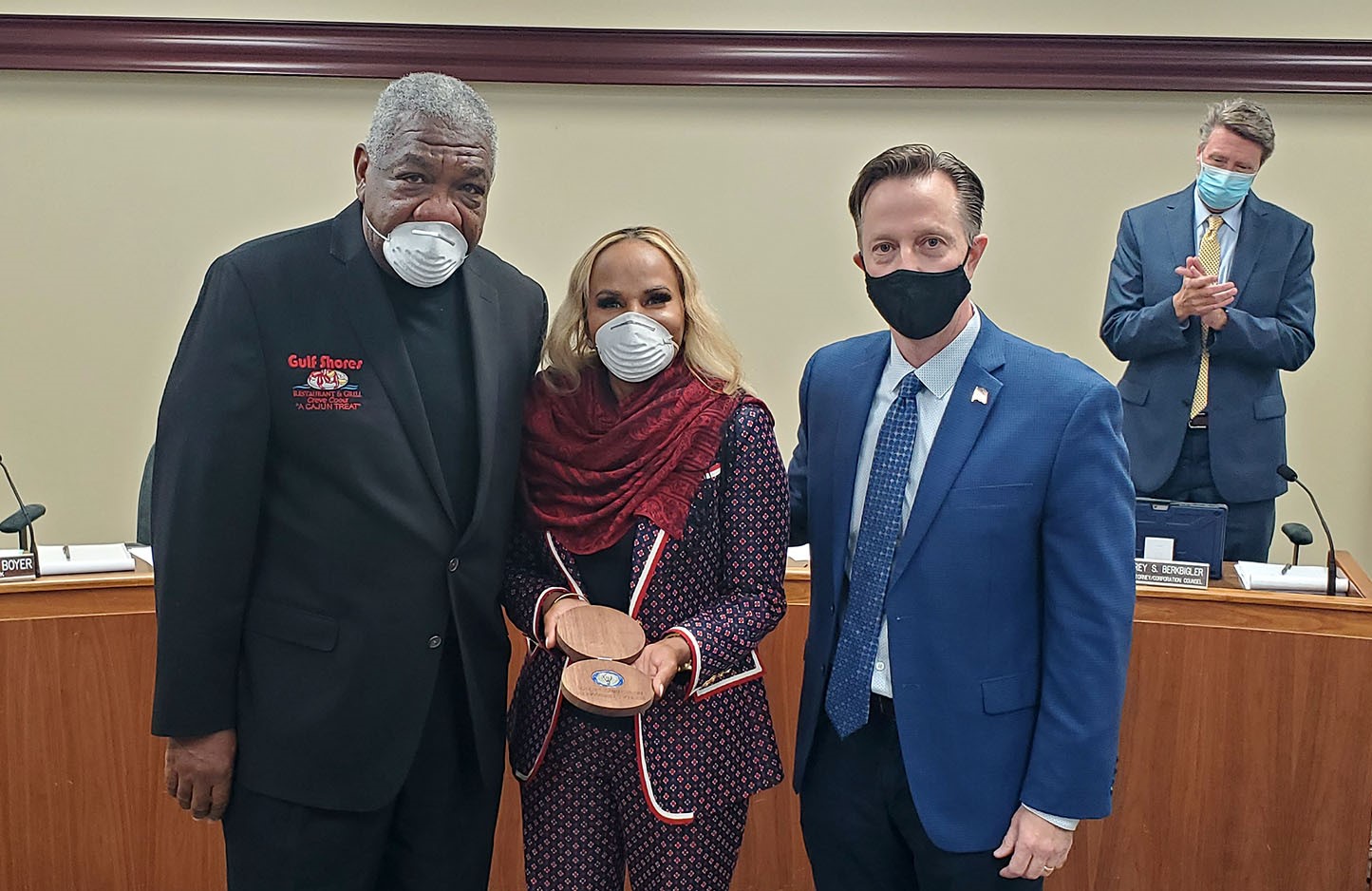 This is a carousel. Use the Next and Previous buttons to navigate

EDWARDSVILLE — Harry and Erica Parker, co-owners of Gulf Shores Restaurant and Grill, are the first recipients of the city’s new Excellence in Edwardsville initiative.

The Parkers donated all Nov. 4 proceeds (dinner in and takeout) from their restaurant, $12,000, to the family of late Pontoon Beach police officer Tyler Timmins. For that, they received the city coin, which was presented at a city council meeting on Tuesday in a wooden box handcrafted by James Hengehold, the city’s telecommunications supervisor. Hengehold made the box at the nearby FabLab on the Lewis and Clark Community College campus.

James Arnold, the city’s director of economic and community development, delivered a speech prior to the presentation.

“The Parker family has a three-pronged mission: to support the military, whether active duty or veteran; supporting first responders; and to support their local community,” he said. “This effort exemplifies and embodies the true meaning of the Edwardsville Award of Excellence.

The Parkers also wanted to say a few words.

“I wanted to say thank you,” Harry Parker began. “When we decided we wanted to do something like this [open a restaurant], of course, that was not what we had in mind. But receiving this kind of appreciation and recognition means a lot to my wife and me.
“We started this thing about 18 years ago when we came here. We decided we wanted to take Mom and Dad’s recipes and make something out of them. We worked in Corporate America for 30 years and we decided, “Let’s do what we really want to do.

“After having a successful restaurant in Creve Coeur (a St. Louis County suburb where the original Gulf Shores is located), we tried to decide [where to put] the second. We came and looked at Edwardsville, not only did we love it enough to build a restaurant here; we love him enough to live here. So, for eight years, Edwardsville has been our home.

“In this particular case [Timmins], we wanted to be the conduit to connect a caring neighborhood to a fallen hero. That’s why we did it. And I have to tell you, the biggest thing we always say, show up and show up. That day we were able to raise $12,000 and give it to the family. Much has been given to us and when much is given, much is needed,” Parker said.
He concluded by thanking the city for supporting their efforts.

Mayor Art Risavy designed this initiative to recognize residents whose generous efforts, contributions and accomplishments promote and strengthen civic pride and responsibility, promote appreciation and embody the spirit of the city to encourage public service through altruism.

Risavy asked city employees who regularly interact with residents to take note of those who act selflessly for the well-being of the community and/or neighbors through acts of kindness. He believes that the residents of this community are essential to making it a great place to live and that those who make it their own through selfless acts make Edwardsville enjoyable for all of us.
City employees and elected officials have and will continue to nominate a resident or residents when they witness positive and kind contributions. Details will then be shared with the city administration and the winner(s) will be recognized at an upcoming city council meeting.