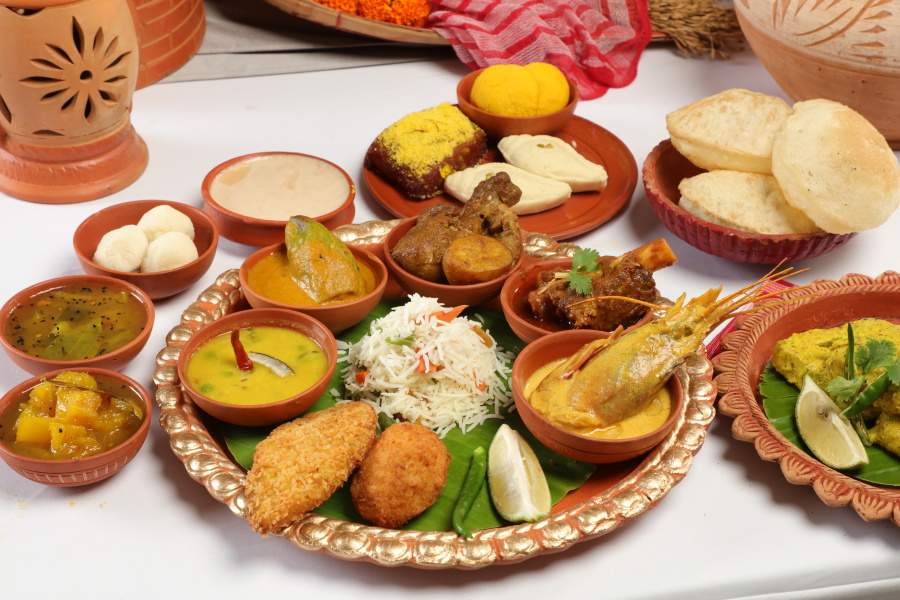 From traditional dishes to fusion dishes, Kolkata diners threw a feast this Puja

Diners, pubs and luxury hotels in Kolkata strive to create distance-friendly dining experiences, and most restaurants have offered delivery, take-out and even drive-up options to reduce contact. and keep things hygienic. Some of the top hotels have set up their own delivery services so that you can have a gourmet home feast for your house party in Durga Puja. A few restaurant bars have offered limited-edition fusion choices that modernize traditional flavors and pair them with cocktails. We’ve sorted out some great options for you to indulge in this holiday season.

To commemorate Durga Puja’s exuberance, the star property has staged a magnificent installation and curated a range of offerings with robust security protocols. Enjoy the highly anticipated celebrations at the Grand Ballroom, JW Kitchen and Vintage Asia with delicious gourmet cuisine which will be complemented by a special gin and wine bar. The wide range of freshly prepared authentic Bengali dishes include Gondhoraj Fish Tikka, Echorer Dalna, Aam Kasundi Paneer, Pulao, Posto Murgi, Mutton Roganjosh and Dhokar Dalna, among others.
Pocket Pinch for two: 3998+

Mark your timeline for Panchami, Saptami, and Nabami as The Lalit Great Eastern intends to take
you on a gastronomic trail with its endless fare. Their Durga Puja Mahabhoj is up to the real thing
big word definition with live stations, pickle and murabba counters, great varieties of raita
and an eclectic range of dishes steeped in Bengali cuisine such as Lonka Ar Kasundi Makhano Bhaja
Bhetki Macher Salad, Olo Chingri, Kumilar Jhal Goshto, Chhana Khoyar Rezala and more.
Pocket Pinch for two: 5,000+

Pujor Mahabhoj at the Oberoi Grand Ballroom this year pays homage to culinary diversity.
Ty of Bengal showcasing over 50 delicacies, completing the world’s largest festival of harmony, creativity and the human spirit. The elaborate buffet will cover all your favorite dishes, from Curry Chingri Malai to Kosha Mangsho and Pabdar Jhal to Bekti Paturi and more.
Pocket Pinch for two: Rs 5,000+

The Bhuri Bhoj of this star property brings together an authentic and rich amalgam of flavors in the form of a buffet at Kava and à la carte at Vertex. The rhythmic sound of dhaak, the scent of dhunuchi and an idol of Maa Durga will light up the mood.

The ibis Kolkata Rajarhat is ready to woo the city’s foodies with Mahabhoj. Start with the sweet and sour Aam Panna, then move on to salads, chaats and appetizers. The main courses boast of nine dishes including Badaam Diye Laal Shaak, Daal Khashi (mutton), Lau Bori and Dhonepata Bata Murgi and an equal emphasis has been placed on vegetarian dishes. Decadent sweets such as Sita Bhog and Sandesh among others are on the menu to end on a sweet note.
Pocket Pinch for two: 2,000+

If you’re planning to indulge in classic Park Street specialties, check in at Trincas Restaurant. The iconic restaurant has curated a classic Kolkata menu with recipes that are part of Kolkata’s culinary heritage. Enjoy continental fare like Thermidor Lobster, Devil Crab, and Ala Kiev Chicken, as well as Chinese fare such as Crispy Drums of Heaven, Golden Fried Shrimps, Pan Fried Spicy Fish, and Original Chilli Garlic Noodles.

This period restaurant will delight your taste buds with the flavors of royalty. Highlights on the menu include Chicken Qalmi Kabab, Mutton Galawati Kabab, Awadhi Sugandhi Mahi, Raan Biriyani, and Awadhi Handi Biriyani, to name a few. Available at all five points of sale.
Pocket Pinch for two: 1,000+

Park Street Restaurant has introduced some excellent Bengali numbers for Puja which are shareable and work great as appetizers such as Dimer Devil, Gondhoraj Mustard Chicken, Traditional Singara, Paneer Pantheras which you can pair with a plethora of cocktails on their menu. .
Pocket clip for 2: “1 800+

The Filipino Festival returns to Virginia Beach this weekend