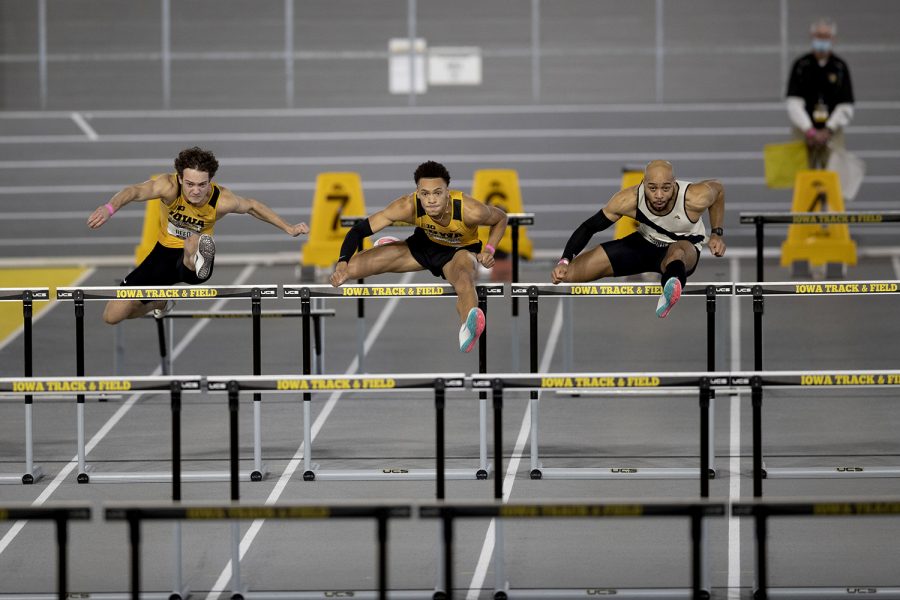 The former Hawkeye will compete for a spot on the Olympic 110-meter hurdles team on Friday.

Iowa Gratt Reed hurdlers Jamal Britt, former Iowa Aaron Mallett – who ran unattached – compete in the first 60m hurdles final on day two of the Larry Wieczorek Invitational on Saturday January 23, 2021 at the University of Iowa Recreation Building. Reed, Britt and Mallett finished fifth, second and first respectively. Due to coronavirus restrictions, the Hawkeyes could only host Big Ten teams. The men from Iowa took first place, scoring 189, and the women were third with 104 among Minnesota, Wisconsin, Nebraska and Illinois.

Former Iowa track and field athlete Aaron Mallett will try to qualify for the 2020 Olympics at the U.S. Olympic Track Trials at Hayward Field in Eugene, Oregon this week.

To represent Team USA in Tokyo, Mallet will first have to come out of the qualifying round. The first round of the 110-meter hurdles starts at 4:33 p.m. Friday and will be televised on NBCSN.

If Mallet qualifies for the final round on Saturday, he will have to finish in the top three and meet the Olympic time standard of 13.48 seconds. The final round of the 110-meter hurdles will air at 9:51 p.m. on NBC.

In September 2020, Mallett set his personal best in the 110-meter hurdles at the Diamond League meeting in Doha, Qatar, with a time of 13.15 seconds. His time beat the other Americans participating in the event by 0.04 seconds.

Mallet did not have the opportunity in 2021 to travel outside the country in the 110-meter hurdles due to concerns surrounding COVID-19.

â€œIt was a little different staying domestic all the time,â€ Mallett said. â€œI used to go overseas and do these type of races with different athletes from different countries and stuff like that, but obviously America has a bunch of great athletes, not to mention hurdles. , so I got to face some really good competition here in the States. “

Nationally, Mallet competed in a track and field competition hosted by the American Track League in Los Angeles on May 15. In the competition, the St. Louis native was fourth with a time of 13.46 seconds. Omar McLeod, the 2016 Olympic gold medalist representing Jamaica, finished first with a time of 13.11 seconds.

Mallet said he could have run a time closer to 13.20 or 13.30 seconds if his block hadn’t slipped early in the race. With such a short race, said Mallet, the start is the most crucial part of the race.

â€œIt was positive in the sense that I still ran pretty well,â€ said Mallett. â€œBut it was also, ‘OK, I could have really asked something and made some kind of a statement.’ But I mean, I guess that’s what testing is for, you go there, you compete with the best, so I’ll have the opportunity to do it there.

There will also be other Hawkeyes competing in the 110-meter event at the Olympic Trials. Former Hawkeye Jaylan McConico finished second at the NCAA Championships on June 11 with a time of 13.38. At the 2021 Big Ten Championships May 14-16, McConico set a program record of 13.23 seconds, eclipsing Mallet’s previous 2017 record of 0.01 seconds.

Rising Hawkeye senior Jamal Britt will also compete in fourth place at the 2021 NCAA Championships with a time of 13.45, the third fastest time in program history.

The final Hawkeye in practice is Josh Braverman, who recently finished his senior season with a time of 13.69 seconds in the 110-meter hurdles.

With everyone bringing their A-game, Mallet said it raises the bar for him to be part of the Olympic team in Tokyo.

â€œEveryone who knows me and those who have followed me for a few years knows how much this sport means to me and how much I can put into it,â€ said Mallet. “And I’m honestly super confident that I can [make the team]. “