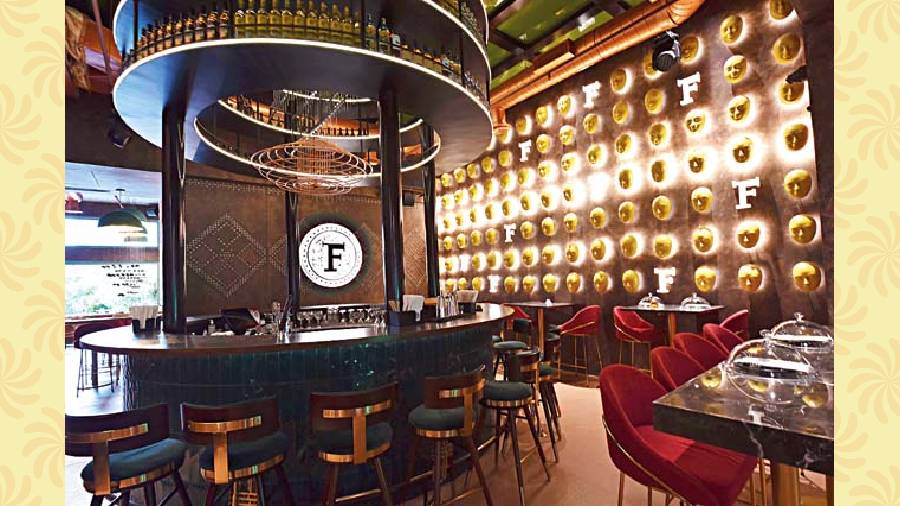 Cafe Farzi: July opened with a bang as national chain Farzi CafÃ© from Massive Restaurants opened its first Calcutta outlet in Golden Parkk. Spread over a 4,500 square foot space, carefully divided into three sections, the Farzi CafÃ© boasts fabulous interiors by Ameet Mirpuri that pays homage to Calcutta which has instantly become one of the city’s most instaworthy places. An infectious vibe and a meticulously crafted F&B menu that includes sips and bites such as Farzi Bubble, Butter Chicken Bun, Tempura Fried Crevettes, Dal Chawal Arancini and Farzi OK make the place a hit.

SodaBottleOpenWala: A subsidiary of Olive Bar and Kitchen Pvt. Ltd, SodaBottleOpenerWala opened its ninth outlet in the city at the South City Mall in November. The national food chain, which focuses on reviving the dying Bombay Irani coffee culture, has opened its nation’s largest outlet in Calcutta. The 135-seat store is beautifully appointed with chandeliers, antique mugs and tiffin boxes that impart old-world charm. The menu offers around 90 dishes with an emphasis on traditional Parsi cuisine and Bombay street food. Vada Pav, Bhendi Bazaar Sheekh Paratha, Patra Ni Macchi, Mutton Berry Pulao, Aloo Aunty’s Vegetable Cutlet, Chilli on the Juhu Beach, Rustom Narangi, and Pheteli Coffee are some of the must-haves on the food and drink menu.

One8 Municipality Calcutta: The brand opened at 13 Ho Chi Minh Sarani in August. Owned by star cricketer Virat Kohli, the bar-restaurant covers 4,500 square feet and seats 100 people and combines comfort and freshness. While the Virat Kohli signature wall is the Instagram corner, you’ll find a bit of Calcutta all around One8 Commune’s second outlet, after their first in Delhi. From yellow cab tables and Howrah Bridge to Kolkata Shrimp Chop Bar on your plate.

Effingut: The most recent national brand to enter the city’s F&B scene is Effingut! The popular brewery present in Mumbai and Pune has opened on the seventh floor of Magma House on Park Street. Spread over nearly 7,500 square feet with 350 seating areas, various sections and ample travel space, the cocktail bar and pub have different vibes in different sections. From eye-catching wall decor, to games, events, to the NSM digital jukeboxâ€¦ there are plenty of interesting corners to look out for. While waiting for their brewery license, let yourself be tempted by artisanal cocktails that will blow your mind. Foods can be broadly separated as diverse and eclectic. Grilled Banana Leaf Fish, Chicken Thecha, Bunny Chow are just a few of your choices that pop on the menu. If you’re planning on making the buzz on your Instagram, don’t forget to try their A Bath with a Stranger – a gin cocktail!

Karim’s: Established in 1913, Karim’s, the legendary name on the Mughlai map of India, traveled north of Calcutta in September. Located in the former theater para Hatibagan, this new gastronomic destination offers original recipes, with spices from Delhi and has made gourmets drool ever since. From the popular Dil Pasand Mutton Seekh Kebab, Mutton Burra, Mutton Quorma to Nihari, the 92-seat restaurant menu is a delight.

Kake di hatti: Directly from Chandni Chowk in Delhi, the traditional North Indian vegetarian restaurant Kake Di Hatti since 1942 opened on the first floor of Neeranand Plaza in Bhowanipore. Spread over an area of â€‹â€‹2,300 square feet, the 64-seat outlet is divided into a 40-seat space and a 24-seat private dining room. The ‘King of Naan’ is passed down through four generations of owners and combines a careful blend of traditional and modern with undertones of coffee, blue and peach and a mishmash of Delhi and Calcutta cultural markers, mirrors Mughal style, and relics of yesteryear. The elaborate menu offers a sumptuous variety of specialties, from tandoori entrees to curries, dals, naan kake rolls and the widest variety of largest size naans! Hariyali Naan, Mooli Naan, Cheese Broccoli Naan … the list goes on. A range of drinks and non-alcoholic cocktails, shakes, desserts to choose from and thalis like the Special Jain Thali are also offered. Climb aboard for a â€œnaan-tasticâ€ feast to end the year.

Unplugged yard: The first national brand to hit Calcutta in 2021 was Unplugged Courtyard. With outlets in Delhi, Gurgaon and Agra, the brand has settled on the rooftop of Golden Parkk with a lounge spread over 7,000 square feet. It is divided into three sections which include both indoor and outdoor seating. The USP and our favorite section is the Terrazza outdoor space which has stunning views of the Victoria Memorial. The menu is comprehensive while there is a wide choice of cocktails and shisha flavors. Palak Patta and Kurkure ki Chaat, dim sums, Naga Chilli Chicken Wings are pop dishes.