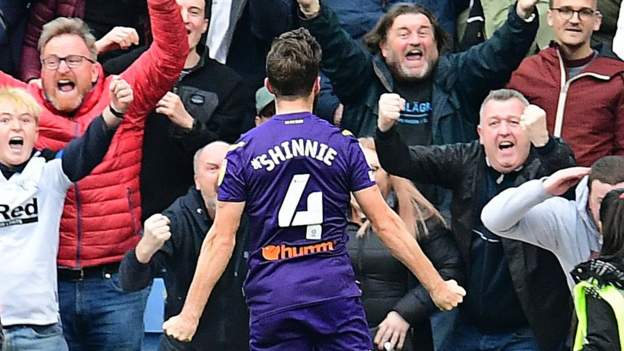 Graeme Shinnie’s late equalizer for Derby County has ended Coventry City’s 100% winning start at home in the Championship this season.

The Sky Blues dominated the first half and entered the break in front after Matt Godden’s penalty.

But Derby, who was without manager Wayne Rooney on the sideline due to illness, improved in the second half and hit the post by Colin Kazim-Richards, before Gustavo Hamer hit the bar at the other end .

The Rams scored when Shinnie dropped a loose ball inside the box and hit home.

It sent the 3,482 Derby fans home with a smile on their face as their side extended their unbeaten run to five matches.

Coventry got off to a good start when Lee Buchanan took down Godden, who dusted himself off and scored on the spot.

Godden was denied a second by Derby keeper Kelle Roos and he also nodded from a corner into the side net.

Derby brought in Kazim-Richards just past the hour mark and he had an almost immediate impact, shooting against the post.

At the other end, Hamer’s 35-yard free kick then hit the bar with Godden heading to the rebound but from an offside position.

Derby’s resilience paid off when Shinnie struck to give the Rams a fourth straight draw.

â€œI have to be happy with one point, after the week we’ve had. Derby is floating under the radar because of their off-court issues, but they’re a very good team asking you questions.

â€œThey sat a little deeper than they normally would and stayed in the game. They had an extra day of rest and that is being said in the last 20 minutes.

“In the first half we had total control and really should have put the game to bed. We were tired of the ball but we didn’t create much. There was sometimes a lack of quality.”

“It was great Colin [Kazim-Richards], a nice weighted ball to Nathan [Byrne] who gets the center and we score.

â€œA lot of people have talked about a lack of goals, but sometimes it’s just a decision in the final third.

“And it was a really good decision from Colin to be selfless and a great finish from Graeme Shinnie. Sometimes those are the hardest because you have time to think.”

The story behind Selva, a psychedelic jungle restaurant in Toronto