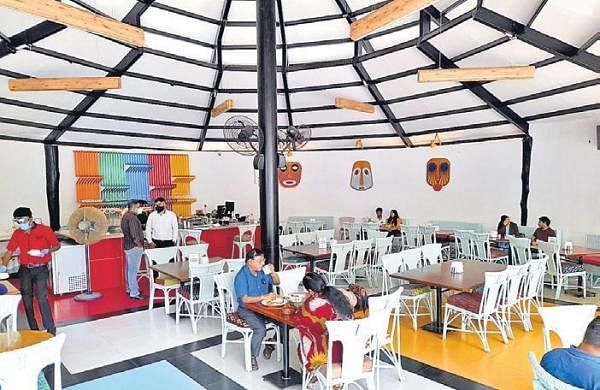 BENGALURU: After being closed for dinner for almost two months, restaurants opened to customers on Monday. While people only arrived at lunchtime, restaurateurs were actually surprised to find more of them than expected. Hakuna Matata, a resto bar in JP Nagar, saw more than 15 guests dine at half past twelve. At another restaurant in southern Bengaluru, Patios in Jayanagar had over 18 guests for lunch. Nirav Rajani, founder of Patios, believes that after being locked up for months people desperately want to spend time outdoors.

â€œEighteen guests was a good start on day one. People have been indoors for about two months and are now looking for outdoor activities, â€he says, adding that not all of their employees have returned to work as many of them are still in their hometowns. Diner Druva N, a student, who had gone out to lunch with his friend after several months, agreed to demand a new experience.

â€œWe are stressed out about sitting at home and eating the same food. We missed that experience. So today my friend and I decided to venture out after a long time, â€he says. Vietnamese-style Hanoi restaurant in Indiranagar owned by Rajani’s wife Diep Vu did not open its restaurant on Monday due to lack of stocks. â€œMost of our ingredients like premixed ground coffee, rice paper, rice noodles are imported from Vietnam. Sellers are unable to deliver on time due to travel restrictions. We will be removing some of the exotic items from the menu.

It’s to avoid waste, and I think people aren’t willing to spend a lot of money on meals at this point, â€said Vu, who also decided to cut the prices of dishes by 20%. Agree with Arun Muragesan, general manager of Hakuna Matata, a restaurant bar, who has also crossed out items from their menu for similar reasons. â€œWe have removed items like Anjal fish, Tawa’s pomfret which move slowly and also fall under the expensive category,â€ he said, adding that only vaccinated employees are allowed to report to work. â€œOnly half of the staff work every other day,â€ he says.

Although online deliveries have increased, establishments believe their balance sheets are in dire shape and will take at least six months to recover. Kuncheria Marattukalan, co-founder of Uru Brewpark, said: â€œThe nighttime curfew and the prohibition of alcohol sales are very damaging to the industry. Usually on a Monday just before the lockdown we had at least 500 guests. Today we just turned 40. The next few months are going to be tough for us. It will take time to recover. “